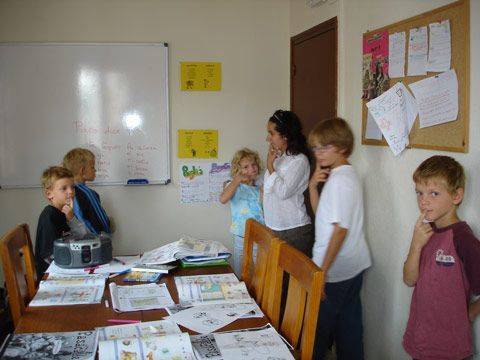 Our Spanish courses for children are especially designed for children aged 6 to 12 years as a part of a family language trip to Spain with their parents or one parent. The goal of the course is to introduce the children playfully to the Spanish language, without making them feel that they are at school. The classes take place partly in the classroom and outside in the wonderful children’s park of our village or on the square. In 4 classes of 45 minutes per day, the children learn to communicate in Spanish, play language games, some of them including movement, sing Spanish songs, do arts & crafts, paint, listen to Spanish music and do role plays in which they communicate in Spanish in daily life situations of a child. We encourage the kids to contribute their own ideas to the program.

You as a parent can participate in the Spanish course for adults while your children are in class, and acquire useful knowledge of Spanish, together with other parents or single parents. The knowledge acquired in the course will greatly simplify travelling in Spain and give you a deeper insight into Spanish culture and lifestyle. In the afternoons and weekends we organize an attractive leisure program for parents and children according to your needs.

The afternoons are free for children and parents to do activities. There are a lot of optional activities organized by the language school’s team, such as canoeing, hiking, horse riding, workshops such as painting ceramics or cultural visits to the famous White Villages nearby. And there are a lot of activities that you can do on your own or together with other families participating in the family program. 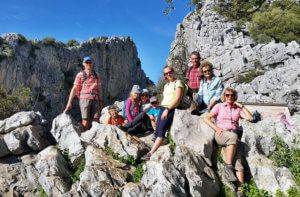 In the summer holidays in July and August, the Spanish courses for children are open to individual enrolments. We take care to compile the groups according to age and previous knowledge.

If you are looking for a more intensive immersion into Spanish for your children in the summer vacations, we can organize a combination of activities with local children in the mornings and Spanish classes in the afternoon.

If you are looking for a more intensive immersion into Spanish for your children in the summer vacations, we can organize a combination of activities with local children in the mornings and Spanish classes in the afternoon. There are several options, which can be combined:

In the last week of June and the first two weeks of July there is a sports camp including soccer, basketball, swimming, and several games, three days a week. Mondays, Wednesdays and Fridays for the younger children from 6 to 9 years old and Tuesdays, Thursdays and Fridays for the children from 10 to 12 years old, from 9:30am to 2pm. The fee is € 100 per child and includes a customized shirt and some shorts.

The activities of the “Ludoteca”, including experiments, workshops like painting or recycling, dancing and theater, start at the beginning of July until end of August, from Mondays to Fridays from 9:00am to 2:00pm. The price is € 25 per child per week.

With this option the Spanish classes start at 3:30pm.

In the Easter and autumn holidays we can organize courses for groups of minimum 3 children. Why don’t you talk to other parents and sign up together?

Longer sabbatical with your children

If you are looking for a longer immersion stay for your children, please just ask us. We can organize different options, e.g. a combination of Spanish language classes and participation in activities for local children like soccer, karate or music school.  When your children have acquired a certain level of Spanish and feel prepared for that experiencie we can help getting them enrolled in the local elementary school for a period. This option is possible for children from 6 to 12 years old, which is the age span of the Spanish elementary school.

If you want your children to learn Spanish in a language camp, where they have Spanish classes in the morning and do common activities and workshops with Spanish children, our Buenaventura Language Camp for Kids is just right for them. We organize the camp in the month of July at a nearby youth hostel in the Grazalema natural park, where the children sleep in mixed nationality dorms with 24 hour care and full board with delicious meals of the Spanish kitchen.

While your children are at the camp you can participate in the varied activities program that the school organizes for you and learn Spanish in a Spanish course for adults optionally.