The students of the advanced Spanish levels B1 or B2 often tell me about some difficulties they face when they meet young people and try to have a conversation with them in Spanish. The language used by young people in Spain the so-called ‘jerga juvenil’ which means ‘youth slang’ or ‘teenage slang’ in English. There are countless expressions and words that have a specific meaning for young people. These are unknown for most students of Spanish, because the teenage slang is usually not a subject in the Spanish classes at university or college. But it is a subject that the students are really interested in because they use slang expressions in their own language naturally and want their Spanish to sound as authentic as possible. Many of the expressions or words we hear on television, radio, etc. belong to the teenage slang and have been assimilated in the common language in a way that they are often used without knowing very well that originally this was a code only used by young people. And over the time they have become commoditized and have gained importance and popularity. The youth slang is a way of speaking, and like the Spanish  language, it is continuously renewed and alive. The youth language has turned into a common language or colloquial Spanish and not only young people use it. Increasingly we can hear people of different ages use this kind of language.

The origin of the teenage slang is not defined, but the reason for the creation of this language may be the interest of young people to create a code that is different from the adults’ to mark the age limit. It is a new communication code reserved for certain communicative situations and it is also a proper form of expression of the youth which is more creative , free, expressive and affective. 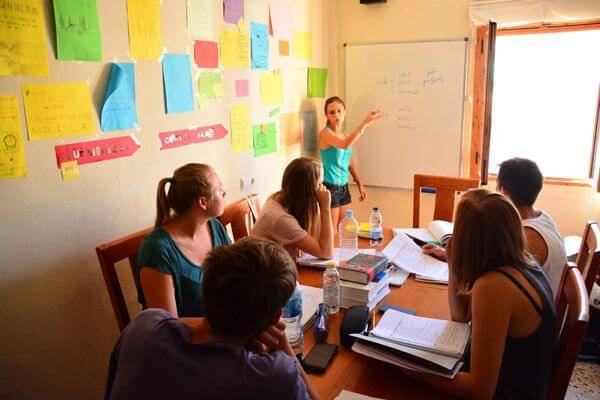 After listening to many comments on the youth slang by the students in my class  I decided to do the following activity. It is preferable that the group is dynamic and has more than 5 or 6 students to carry it out. First, I did a short introduction about what the youth slang about its importance in Spain, like the explanation I have given above. I had selected a series of commonly used phrases and vocabulary words from the long list of youth slang you can find currently, that we think may be useful for our students. I chose 24 expressions and vocabulary words for my class and divided the class into two groups: group A (two people) and group B (three people). I had written the 24 expressions on little cards devided into two parts (the expression on the one hand and the meaning on the other hand). Then I put the cards on the table and the whole group had to try to unite expression or word with its meaning according to their intuition. I observed their conversations all the time and helped the students find out the correct connections. Once everything was solved, the students had to deduce in what contexts each expression could be used. The main objective of this activity is that the students talk in Spanish all the time and that they can interpret the meaning of the expressions among them. I was especially attentive to the students’ explanations and thus corroborated the meaning of each expression. Once everybody knew the meaning of all the expressions, I proposed the students to make a dialogue in their small groups, using the youth slang we had just learned.

And here I show you two of the creations of my students:

This activity is very interesting, as students interact with each other, they develop creativity, they speak Spanish, get to know the Spanish youth slang and have fun at the same time. I have to say that this activity worked very well and we laughed a lot in class, which is fundamental … learning Spanish and having fun. The students had a great time in class and I laughed a lot with them. I recommend this activity to other Spanish teachers for their groups of the B1 and B2 level.

If you are a Spanish teacher or you are currently studying to be a Spanish teacher and you are not a native speaker, you might be interested in our Didactics and perfecting course for non-native Spanish teachers. In this course you can learn about the latest tendencies of methodology, take away a lot of activities for your Spanish class and exchange ideas with other teachers.

One Response to “Activity for the Spanish class: The teenage slang”